Do You Know a Victim?

Don’t get locked into the idea that your children are totally safe!

“Victim” sounds like one of those words that applies to someone else.

Let’s check that out. Here are the two most common definitions according to the on-line Merriam-Webster’s Learner’s Dictionary.

Much to my surprise, there are two current news stories that show how prevalent being a victim is and how easy it is to become one. The first is about the new sensation Pokemon Go, and the other is about our schools.

Here is some important background information about Pokemon Go:

* It’s a game that any age can enjoy because it is simple and easy to use.

* It stimulates seeing things that you otherwise might not have noticed.

* The social aspect distinguishes Pokemon Go from other games.

Exercise is another big perk because this game gets people out and going to all kinds of places. The accolades go on and on.

Here is the sad part. While some towns are busy benefiting from this game with a new sense of community and the excitement of people getting together and enjoying each other, other cities like ones in Missouri are morning the robbery of teen victims who were out one day having fun with this very same game.

What happened? Several teens, whose ages ranged from 16 to 18, allegedly used the app to bait victims to a particular spot, and then they robbed them. These teens are suspected of 10 or more other armed robberies too in St. Louis and St. Charles counties.

How? The app, which allows users to interact virtually with Pokemon characters, has a “Lure Module” that players can use to attract both Pokemon and other users to their location.

Now to our schools. Unfortunately, that is one place where predators are. These are people who prey on children who are weak or fragile in some way. Often these kids have difficulties at home or are fighting some other kind of difficult childhood challenge. One needy predator finds one needy victim-to-be and boom! That’s it, one terrible attack, and then many, many more.

When you were in school did you ever suspect that one of your teachers could have been taking advantage of one of your friends? How about your children? Are you sure they are safe and sound?

Here is a current story from a local Arizona newspaper printed on July 20, 2016: Todorich finally sentenced

What happened? John Todorich, a former educator was finally sentenced to 40 years in prison. He pleaded guilty to three counts of luring a minor for sexual exploitation, sexual conduct with a minor, child prostitution and more. Todorich was a fifth grade physical education teacher in one school district from 1988 to 2005. After leaving there, Todorich went on to continue his role as physical education teacher in another nearby school system.

Why such a delay to convict? Lack of evidence and witnesses.

How did he get away with this behavior for so long? These are crimes that took place behind closed doors. These were done to victims who knew nothing about the ins and outs of life and were hardly able to understand what happened to them.

Victim? You, me, our children, everyone. Yes.

Did you ever have a friend who was a master at passing notes in school… and then you got caught?

Did you know any particular friend who irked you all the time… and then you got caught for fighting back?

Did you once have a salesperson somewhere show you an example of the finest caviar, perfume, jewelry, etc… and then sell you an inferior product?

Did someone you know introduce you to smoking as a cool and innocent activity… and then you became a chain smoker for the rest of your life?

Do you have a child on drugs, who innocently one night, was coaxed into having what was presented to him or her as “good, clean fun”… and then your family horror began.

Please send any relevant ideas or suggestions on to me at drsallyinarizona@gmail.com so that I can be as helpful as possible to those in need. Thank you very much.

Sign up for Parenting Tips at Parenting with Dr. Sally

« Predator Relationships are Real!
I Did It! Oh Dear »

Fun Baby Learning Games brings a new approach to having fun and learning.

Click here to purchase or read more about it. 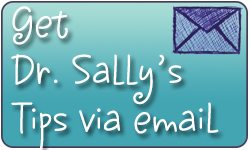